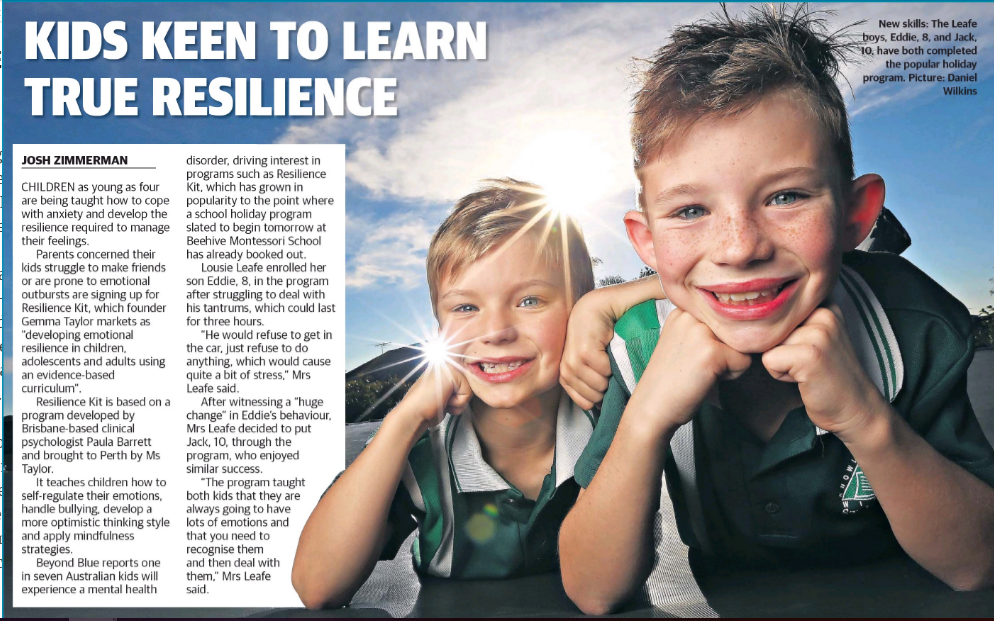 Originally published in The Sunday Times, 8 July 2018 by Josh Zimmerman

CHILDREN as young as four are being taught how to cope with anxiety and develop the resilience required to manage their feelings.

Parents concerned their kids struggle to make friends or are prone to emotional outbursts are signing up for Resilience Kit, which founder Gemma Taylor markets as “developing emotional resilience in children, adolescents and adults using an evidence-based curriculum”.

Resilience Kit is based on a program developed by Brisbane-based clinical psychologist Paula Barrett and brought to Perth by Ms Taylor.

It teaches children how to self-regulate their emotions, handle bullying, develop a more optimistic thinking style and apply mindfulness strategies.

Beyond Blue reports one in seven Australian kids will experience a mental health disorder, driving interest in programs such as Resilience Kit, which has grown in popularity to the point where a school holiday program slated to begin tomorrow at Beehive Montessori School has already booked out.

Louise Leafe enrolled her son Eddie, 8, in the program after struggling to deal with his tantrums, which could last for three hours. “He would refuse to get in the car, just refuse to do anything, which would cause quite a bit of stress,” Mrs Leafe said.

After witnessing a “huge change” in Eddie’s behaviour, Mrs Leafe decided to put Jack, 10, through the program, who enjoyed similar success.

“The program taught both kids that they are always going to have lots of emotions and that you need to recognise them and then deal with them,” Mrs Leafe said. Learn more about the group programs here.